The number of commitments keeps rising, but so do the stakes in decarbonization.

This story looks to 2030 by documenting allocations already underway that can grow this year, and next, and on.

Despite over 6,000 cities’ leaders having signed climate action plans, global CO2 emissions have risen nearly 5% in 2021. They rose by 7% in the United States. While values are inflated by post-pandemic growth, pre-COVID global emissions have increased by 1.5-2% annually in the past two decades. Set against the latest IPCC report that stresses immediate action is required to halve emissions by 2030, this reality is bleak.
To meet global climate goals, the price tag is estimated to be $100+ trillion, or $4-6 trillion annually from 2020-2050, according to the Climate Policy Initiative (a climate-focused think-tank with finance and policy expertise). Where’s this capital going to arise, and for how long?
The Clean Energy Finance Forum has written about how Yale scholars and leaders in the proverbial trenches have emphasized that climate solutions need to engage business, government, and citizens. Even so, with costs of climate solutions on a continuous rise, we need more capital to address funding gaps.
Given the influx of climate engagement by ESG investments, it’s safe to say that private investors have mobilized against this crisis.
The latest and most substantial engagement by the financial sector is the Glasgow Financial Alliance for Net Zero (GFANZ), announced during COP26. Led by Mark Carney, the former Governor of the Bank of England, GFANZ is composed of 450 financial firms and represents $130 trillion of private capital “committed to transforming the economy for net-zero”. For scale, total global investable assets are $250 trillion; GFANZ represents more than 50%.
Other notable alliances from the private sector include the Coalition for Climate Resilient Investment, with 120+ members and $20 trillion assets under management (AUM) to address physical climate risks; and the Climate Finance Partnership, a blended finance fund led by BlackRock to accelerate climate investments in emerging markets. With $10 billion under management, BlackRock leads the world in financial sway.
However, amid these commitments, actual global investments towards climate initiatives barely reached $630 billion in 2019. Of those investments, the private sector contributed about 40% ($234 billion by financial institutions, institutional investors, asset managers, and corporates).
So what can we learn from the investments made to date? Where have we seen effective examples of private sector engagement (following through on their commitments) and how can these case studies serve as a playbook for GFANZ and similar initiatives? Start with the Climate Policy Initative's chart below. 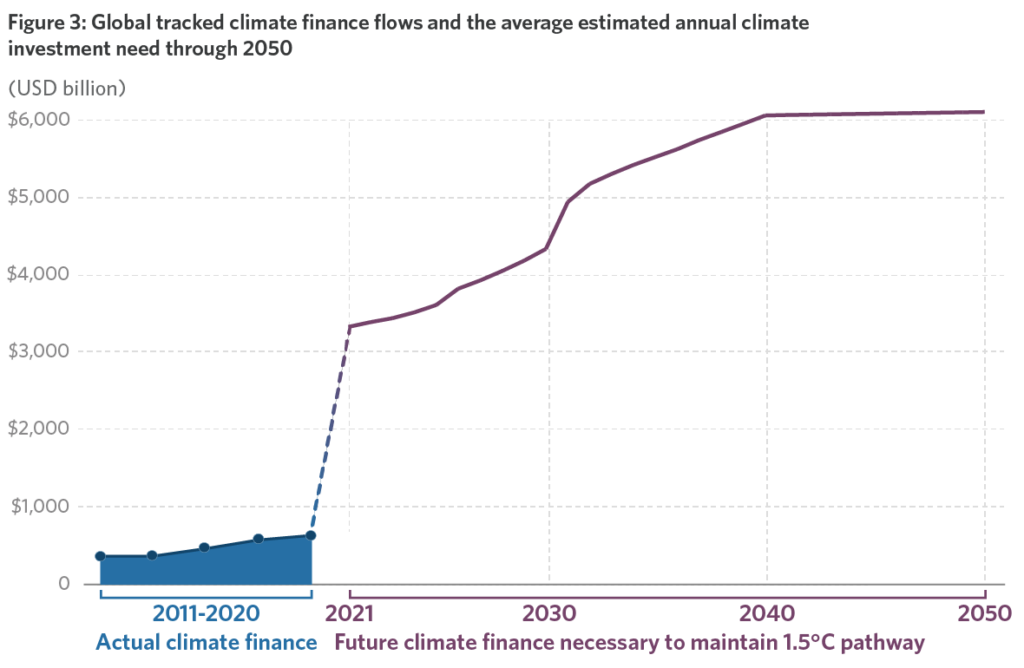 Based on the required investment to address global resiliency, adaptation, and mitigation needs, there remains a $3.5+ trillion annual gap (which totals up to $100+ trillion by 2050).
While the recent commitments of GFANZ seem promising, the merits of the $130 trillion committed remains highly contested. It’s unclear how much of the $130 trillion consists in actual funds committed towards climate solutions vs. assets under management of firms that signed the pledge.
Whatever its content, questions remain open about how private capital can be most affordably, efficiently, and quickly mobilized to serve communities at steepest risks of job loss, climate catastrophe, or both.
To answer that, let’s think like the asset owners and managers, decision makers, and civic leaders in this experiment.
Traditionally, public finance sources like multi-lateral development banks (MDBs), development finance institutions (DFIs), and governments have led climate investments. Today, the investment landscape is changing as traditional institutional investors (asset managers, and by virtue asset owners) reallocate their investments to reduce climate risk exposure.
They’re also navigating new rules and boundaries. For example, in response to rising concerns of greenwashing, the ( ) formed the International Sustainability Standards Board and is likely shifting towards mandated climate accounting disclosure (following the SEC’s proposal this March requiring publicly-traded companies to disclose climate risks and an actionable plan to address them).
In addition, innovative financing structures help de-risk projects that traditional investors would be more hesitant to capitalize. Take, responsAbility, an impact-driven management firm that raised a $158 million Access to Clean Power Fund (ACPF) to deploy in Sub-Saharan Africa. Through securitization, the impact fund pooled capital from investors with different risk tolerance. As the chart below shows, it met the criteria for Bank of America and for more risk-sensitive investors. 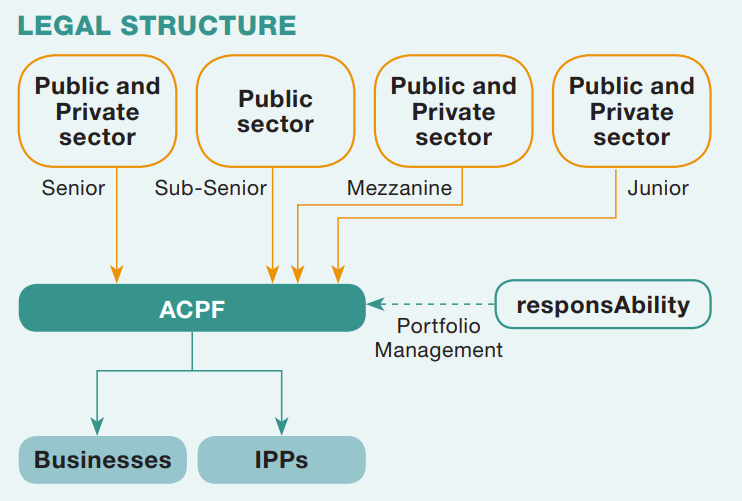 Source: Taskforce Workstream B report (Mobilising institutional capital towards the SDGs and a Just Transition)
Furthermore, as asset owners shift beyond single bottom-line targets, they are more likely to seek asset managers who can navigate the evolving investment landscape. For one, the IFC Impact Principles (the standard to manage impact investments) will likely be adopted more broadly. As of today, only $400 billion assets are managed in line with these principles (out of $250 trillion of global investable assets).
Many organizations have also laid out science-based investment and decarbonization plans for companies to adopt. Global frameworks include Project Drawdown, GFANZ’ Financing Roadmaps tool, and America’s Zero Carbon Action Plan. (The latter focuses on the United States.)
Another investment lens focuses on city-level climate action, as ~75% of global CO2 emissions stem from urban activities. Successful adaptations by cities can serve as blueprints for other collective groups with disparate stakeholders in the climate transition. To date, there are many examples of capital from the financial sector flowing into climate-related projects – for a US-based one, let’s take a look at Ithaca, NY.
The built environment accounts for 40% of carbon emissions globally and in Ithaca. Within the built environment, roughly 70% of carbon comes from building operations and 30% from building materials and construction.
Ithaca’s assertive Green New Deal includes decarbonizing over 6,000 residential and commercial buildings within the decade. With an estimated budget of over $600 million, the transition efforts cost 7x the city’s current annual budget of $80 million.
Rather than only relying on traditional state-sponsored funding, Ithaca has attracted capital from private investors, including $100 million from private equity firm Alturus (to spur the first phase of the plan). According to Ithaca’s Director of Sustainability, Luis Aguirre-Torres, sourcing capital from private equity offers faster and more substantial funding. The target ratio of taxpayer versus private investment funding for the city’s decarbonization efforts is 1 to 20.
But private capital demands compelling returns, so Ithaca pooled its building stock to create security with significant scale. In addition, to help reduce the project’s cost of capital, the city is partnering with local governments, utilities, and start-ups. This includes working with BlocPower, an energy start-up specialized in decarbonizing buildings. Ithaca’s partnerships across sectors bring different expertise and resources to speed their transition efforts.
Furthermore, to ensure an equitable transition by including low-income households, Ithaca offered building owners and residents low or no-interest loans, reducing the high-upfront costs typically associated with building upgrades.
But every community is unique, and the scale of the global change required will cost trillions of dollars and affect billions of lives. So how should one reconcile the trillion-dollar commitments with the local efforts needed by communities?
One consideration is to observe the power of compounding in positive signs of technological, social, and political change. Take for example, the exponential growth in EV sales, offshore wind investments, and most recently carbon capture technologies; the rapid development of these technologies, followed by the proliferation of supporting sectors, demand greater capital to scale and present new opportunities for investors.

The point is not to overemphasize private sector capital as a solution, but to hold asset managers and owners to the commitments they have made.

Professor Richard Kauffman, Chairman of the New York State Energy Research and Development Authority, cautions that overreliance on private markets as capital is not the limiting factor in deploying clean energy solutions. While private sector solutions play a larger role in the climate transition, there needs to be policy support to create the right incentives in creating market demand (which will in turn attract further capital).
The point is not to overemphasize private sector capital as a solution, but to hold asset managers and owners to the commitments they have made.
As such, Professor Namrita Kapur, Sustainable Finance Lecturer at Yale School of Management, highlights three goals for effective deployment of capital: fast, efficient, inclusive. With less than 8 years remaining before the carbon “budget” is depleted, there is incredible pressure to invest in the necessary infrastructure and to change the reliance on oil (amongst other fossil-intensive resources).
Furthermore, strictly focusing on environmental issues without incorporating a socio-economic lens is insufficient. The G7 Impact Taskforce introduced three integrated ‘Just Transition Elements’ that should be prioritized in any investment decision: (a) advance climate and environmental action; (b) improve socio-economic distribution and equity; (c) increase community voice. While investors have a fiduciary duty towards maximizing returns (that have historically de-prioritized the equity lens), there is rising pressure against the traditional shareholder primacy model.
Throughout Zoom calls and boardrooms, asset managers are reckoning with scale. Scientist Vaclav Smil has made it to global magazines and drawn Bill Gates’ endorsement for writing a book reiterating that addressing climate change means redesigning our economy.
And pressure still applies from behind. A recent report co-authored by Sierra Club, Reclaim Finance, BankTrack and other organizations highlighted that since the 2015 Paris Accords, $3.8 trillion of fossil fuel development has been financed by 60 of the world’s largest banks (while the annual gap of climate investment required to meet climate solutions remains $3.5+ trillion).
The climate transition isn’t hopeless, but is incredibly difficult. And while the investment required to meet climate solutions is only increasing as emissions rise, this only further stresses the importance of moving from commitments to actions – with finance trying to control the uncertainty along the way, as finance always has.

Luis Aguirre-Torres, Ithaca's sustainability director, studied in our last Financing and Deploying Clean Energy cohort.  He wrote this policy memo in that context.